Dissociation can be viewed as severance of the connections between ideas and emotions. It involves feelings of unreality, estrangement, depersonalization and sometimes a loss or shift or identity. Sudden temporary alterations of consciousness that blot out painful experiences are defining characteristics of Dissociative Identity Disorders.  Dissociation or interruption in aspects of consciousness including identity or memory. Examples of dissociative symptoms include the experience that one is outside of one’s body, sense of detachment and loss of memory.

It is estimated that 2 percent of people experience dissociative identity disorders, with women in great number compared to men. They are generally associated with the previous experience of trauma. Stressful situations generally worsen the symptoms. The symptoms can potentially disrupt every area of mental functioning.

The Sidran Institute explains dissociation as a disconnection between a person’s thought, memories, feelings, actions or sense of who she is. Examples of mild dissociation include daydreaming, getting lost in a book or movie, all of which involve losing touch with awareness of one’s immediate surroundings ( as reported in the APA website).

People who have experienced disasters or certain kind of trauma often use this as a way of escaping the horror or mental pain but sometimes go to an extent that they don’t remember any details of the experience when asked later on.

Significant memory loss of specific time, people, and event – no account of some things that have happened in the past; out of the body experiences- the person feels as if he/she is watching the events from outside and not their own body; a lack of sense of self-identity – they don’t remember personal information; a sense of detachment from emotions- because of the memory gaps they become detached from everything they once cared for and mental health problems such as depression, anxiety, and thoughts of suicide.

Dissociative disorders are usually a way of dealing with trauma. Sometimes people have faced abuses that tore them emotionally and mentally. In order to block those memories, it becomes a safe passage to hide them deeply. It often forms in children who were exposed to long-term physical, sexual or emotional abuse. Natural disasters and combat can also cause dissociative disorders. And when asked later they can’t recall anything clearly. 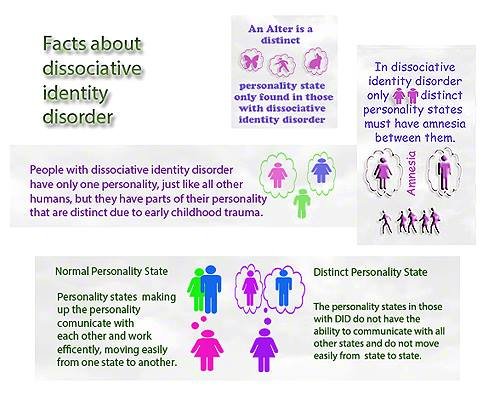 Dissociative Identity Disorder it is characterized by alternating between multiple identities. A person feels there are certain voices that are trying to control their heads. The identities have different names, personalities, voices or manners. It is associated with traumatic events, abuse that has occurred in childhood. The attitude and personal preference of people changes when a new identity comes into the picture. It happens involuntarily and is unwanted causes distress. People can sometimes feel that there is something different with the way they are acting now. For example in a female, a male identity is there so she feels huge or muscular about her body.

Women are more likely to be diagnosed with this. Men have rather denied symptoms of trauma and exhibit violent behavior. In a lot of cultures, people think this as being possessed by a ghost or supernatural power and generally go to a tantric someone who knows black magic.

The Sidran Institute notes that a person with dissociative identity disorder “feels as if she has within her two or more entities, each with its own way of thinking and remembering about herself and life. It is important to keep in mind that although these alternate states may feel or appear to be very different, they are all manifestations of a single, whole person”. Other names described these alternate states including  “alternate personalities”, “alters”, “ states of consciousness” and “identities”.

It is characterized by the presence of two or more split personality states that exerts power on the person’s behavior. Memory fluctuations are quite common when the other alter or personality is in power. All of the different identities, sex, age. Their eating habits, postures, and gestures are all very distinct from the real person. The whole change is called ‘switching’ which happens in seconds or minutes. Under hypnosis, the person’s alters are very responsive to the therapist request. Other comorbid problems that occur in sleep disorders, anxiety, phobias, eating disorders, hallucinations and suicidal tendencies.

As already mentioned earlier the major cause of dissociative identity disorder is the trauma or abuse a person might have faced when they were a child. The people who are at the higher risk of developing one have had a similar experience of abuse or neglect in their childhood.  The frustration gradually leads to an increase in suicide attempts and other self-injurious behavior. It has been a record that patients suffering from dissociative identity disorder have tried to attempt suicide once in their lives either willingly or unwillingly (forced by the other identity).

With appropriate treatment, a lot of people have been diagnosed and given proper therapies and are now able to now live a productive life. It involves Psychotherapy that can help people gain control over the dissociative process and symptoms. It can become intense and difficult to handle because the process involves coping with past traumatic experiences. Cognitive Behavioral Therapy and Dialectical behavioral therapy are also commonly used for DID. Hypnosis has also been found useful because alters vary during the process which helps in getting a count of them. Medications are still not prescribed for the pattern but it can be given for other alternating situations that exist with DID.

Some famous cases and their histories

Environmental triggers or life events cause a sudden shift from one alter or personality to another. Average 13 to 15 personalities are seen but in unusual cases a alter of 100 personalities has been observed.

In 1995, Noble was finally diagnosed with DID. Her dominant personality is named Patricia, and under her care, Noble has become an artist and lives with her daughter.

DID is about survival

According to stats, the rate of dissociative identity disorder is 0.01% to 1% of the general population. Believing it to be a real disorder is still tough even for the professionals because of its controversial nature. DID exist and that cannot be debated but there are concepts of supernatural power that take all of the attention. An Ojha is still more preferred than a doctor in a lot of places. Maybe awareness lacks but clearly it needs to be treated as soon as it is diagnosed.

Childhood abuses turn out to be the worst for an adult. It is hard to forget any experience that has left the inner child in you scarred for a lifetime. Know this that – You are not responsible for what happened to you when you were a defenseless child.  Not getting help later on in your life can be a wrong decision. Help yourself by coming forward and addressing the issues.

“DID is about survival! As more people begin to appreciate this concept, individuals with DID will start to feel less as though they have to hide in shame” – Bray Haddock

For many seniors, adapting to an assisted living facility can take time, as it’s often a move that feels out...

Seven Things You Most Likely Didn't Know About Same-Sex Marriage