What is the Broca’s Area and Wernicke’s Areas

It is unbelievable knowing each region of the brain and for what function each of the function. The brain is such a broad topic to which it needs time in order to make clear its role, its purposes are meant to be awesome just because still there are many things which hang on researchers in exploring its capacity that brain has in each person.

Furthermore, language is one of the components that sometimes if damaged might bring some changes for which two science as Carl Wernicke and Paul Broca gave contribution in developing their effects in humankind. The following paragraphs will relieve in details their importance.

Also Read: What a Man Likes in Woman Reveals A lot About His Personality

What Are Aphasias Disorders?

First of all, it needs to give an explanation about those zones in the brain called aphasias. Aphasia is a speaking disorder, to which people have difficulties in word articulation and the logical connection of what they speak (Nushi and Juniku, 2006, p.163).

This pathology happens quickly and unexpectedly, due to a stroke or head damages and its progress appeared to be gradually, some samples of them can be a brain cancer, a contagion or any mental disorder like dementia.

Moreover, it is important to mention that stroke happens when blood is blocked and cannot succeed in any region of the brain, in that situation those brain cells die as a lack of regular furnishing blood instead of containing oxygen and essential nutrients. This problem might occur to anyone as well as kids but most of the time happen to the people who are neither young and nor old or aged people without making differences to the gender too (National Institute on Deafness and Other Communication Disorders, 2008).

Broca claimed that the aural information is transmitted to the temporal lobes from the ear to Wernicke’s area in which tones are converted into illustrations or concepts of object and memorized.

The information from the Wernicke’s region is transferred to the so-called arcuate fasciculus that is a path to the Broca’s zone to which representations of language are stored. Those data of Broca’s are directed to the muscles when the mouth is able to articulate the voice (Kolb and Whishaw, n.d. p.13). Additionally, those aphasias introduce Wernicke’s and Broca’s areas. 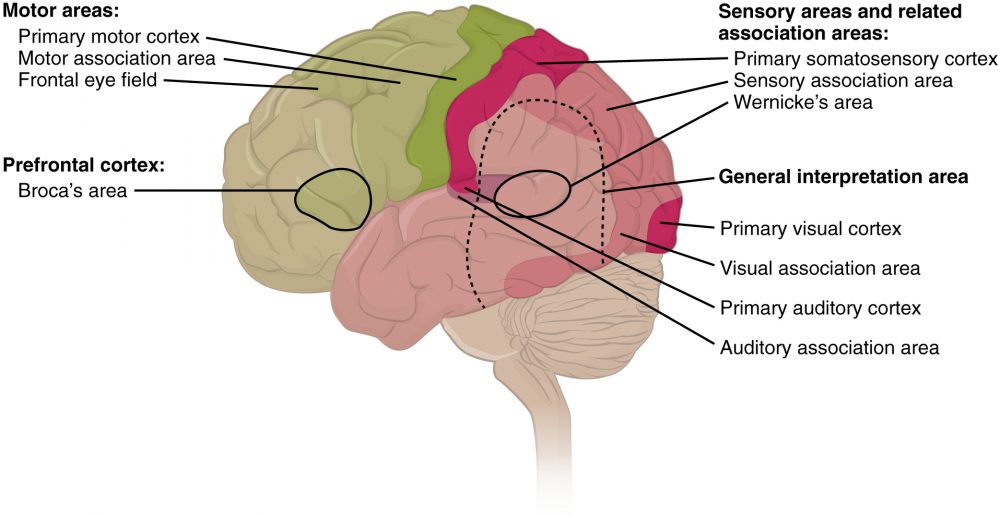 The Role of Broca’s Area

Broca’s region has been named by the French physician Paul Broca situated in the left hemisphere when the frontal, parietal and temporal lobes are linked. This region is manifested with hurdle articulation of words and sentences, no matter if there is no problem with the most powerful muscular in a body that is tongue.

Patients with Broca’s disorders are able to grasp words and sentences but they cannot make difference in the meaning (Nushi and Juniku, 2006, p.163). Broca’s complications are different from Wernicke’s since they do not have troubles with fluency comprehension because this zone controls syntactic issues such as grammar, the pronunciation of words and sentences by following low tone, reluctance speaking and sometimes articulation of words is not as it should be.

It would be better to stop modifying the way they communicate and give them time to repeat their words, give them chances to be part of any sports club in order to be involved in the society (National Institute on Deafness and Other Communication Disorders, 2008).

Also Read: What is Trypophobia?- A Fear of Holes! Symptoms, Causes And Treatment

The Role of Wernicke’s Area

Wernicke’s zone has been named based on a German investigator Carl Wernicke placed in the left temporal lobe and is responsible in compression of words to which we produce and the fluency of the words is meaningless. If this area can be injured people have problems in articulation, pitch, vocabulary, incomprehensible words and “word salad”.

Those patients speak easily and quickly but the meaning of their speech is not understood by the interlocutor, that is why they are labeled as aphasias problems.

They have semantic problems even if they understand it, an example of it within a simple sentence can be, “The boy chase the girl” which could be easy to them but the other with the complex sentences might be problem, like this sentence “The apple the boy ate was read” and also are those deficiencies with verbs and nouns to which they show no relation such as, “The boy the girl pushed was tall” (Squire et al., 2008).

Wernicke’s patients are faced with those injured to the first temporal gyrus, there is no paralysis, they are able to speak but their language is complicated and made little logic, they can hear but could not recognize or to say again what has been said (Kolb and Whishaw, n.d. p.13).

In short, the brain is responsible for every tiny movement in our body, it works perfectly but if any area damaged can bring disorders that might be variable. Sometimes, those injured are not the same, an illustration of it can be those pathologies as language disorders of Wernicke’s and Broca’s areas.

Those zones are responsible for the accuracy and articulation of speaking but if in any case of impairing it cause problems in pronouncing words, there is incorrect word order and sentences in overall even if those people are able to understand them correctly. Thus, it is suggested to take care of health particularly the metal healthy because brain diseases hardly can be cured or prevented.

Hope you have enjoyed this article. Get Free e-Book on Psychology Today. Also, This article was contributed through our submit article section. You can contribute too.

- Advertisement -
Previous articleMine is Bigger Than Yours | Why is This Argument Necessary?
Next articleWhat is Sleepwalking (Somnambulism)? Causes, Symptoms & Treatments

Spousal Private Investigation Services: Are they worth it?

Spousal Private Investigation Services: Are they worth it?

It’s Not Your Job to Like Me – It’s Mine

I Have Anxiety – It’s More Than Being Too Sensitive, It’s Not What It Looks Like

How To Deal With Panic Attack